Monitoring MSSQL server environments can be a tedious and demanding task especially when you are dealing with various versions across multiple servers. It is impossible to dedicate resources to manually monitor each instance however MSSQL does include out of box functionality to assist called MSSQL Alerts which is also available even in older versions of MSSQL such as MSSQL server 2000. MSSQL alerts can significantly assist in letting you know when a failure is imminent or has just occurred. That is just the start though, various other event driven functionality that you would like to implement can also be achieved by the different responses available in MSSQL Alerts. Alerts can also be manipulated to run when and how you would like them to run and furthermore the data that they provide can actually be collected and used for reporting.

MSSQL alerts are implemented via the MSSQL agent hence the agent has to be running in order for your alerts to fire. There’s a vast number or alerts available and these are listed under three main categories which may drill down even further. 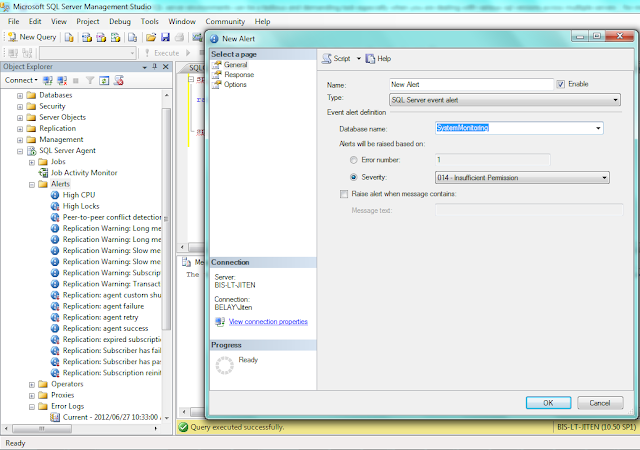 Sql Alerts can be located under the MSSQL Agent in SSMS. Simply expand your SQL Agent and right click your alerts folder to create a new alert. It is possible to restrict your alert to a specific database and further restrict the alert to only fire if the message contains a certain phrase. 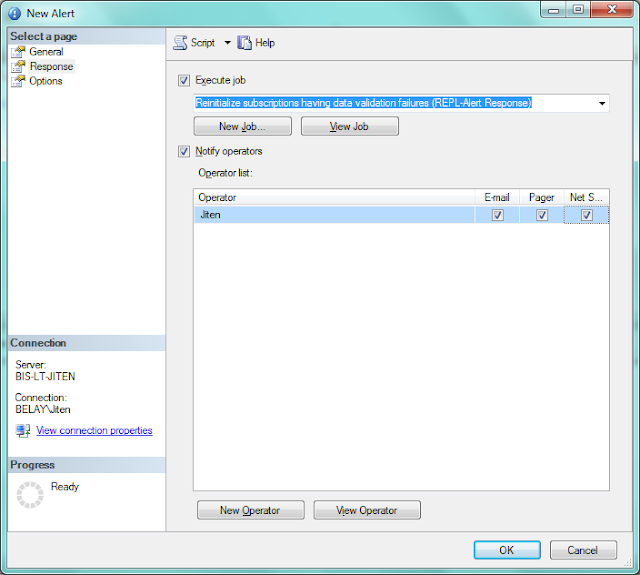 Whilst setting up your alert you have the option of setting the action to be taken when the alert is triggered. This can be set to notify an operator via email, pager or net send. Make sure DB Mail is set up and ticked in your MSSQL agent properties in order to receive mails. There is also an option to run a job, this opens up a world of possibilities and can be very useful as this can be used to resolve a problem without any human interaction like above. The jobs that are run can also be used to capture additional information that can be used to discover why the problem occurred. Notifications and job execution may both be ticked. 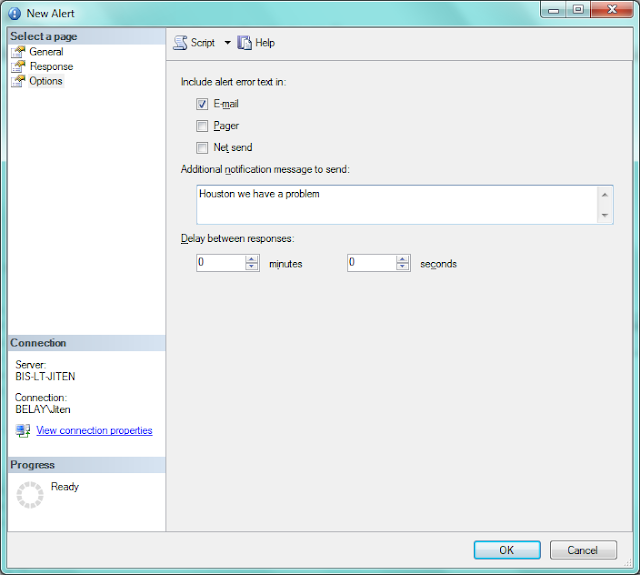 Alerts can be enabled and disabled via Sql queries. This can be very useful if you would like to only have an alert firing during a certain period of time or if a certain business rule is met. For example if you wanted your replication latency alert to fire only during business hours or when a job that inserts large amounts of data into the system is running, one could make use of a job to enable the Alert on a specific schedule or add steps to the beginning and end of a job that you would like to monitor which then contain the sp_update_alert system stored procedure eg

It is also possible to intentionally create an error which will trigger an alert by making use of the Raiserror() function. This can be useful if you would like to trigger an alert within scripts or jobs. Alerts can thus be further manipulated to include business rules and scheduling on an error level with dynamic comments. Here is an example of a custom Replication latency alert script which I wrote to get around a problem of a replication latency error not being raised in Certain Versions of MSSQL by using the Raiserror() function. Once the error is created the alert picks it up and acts accordingly.

A great side effect of all this data being relayed to the operator is that one can use it for more than just problem solving but also as a base to report off and discover trends in your database server’s health. We can achieve this by different methods, Here are a few.

Once you have collected an adequate amount of data you can plug it into SSRS, Excel or whatever reporting mechanism you may fancy and create reports to analyse the data. Eg 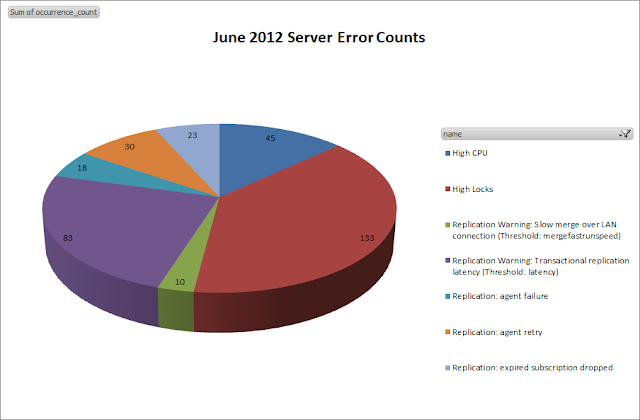 Sql server alerts are a great way to let you know of problems when they occur so that you can get onto fixing and solving them before they turn into a disaster and with the added benefits of job runs as responses, alert manipulation and reporting/trend analysis one can definitely stay one step ahead…