Below is a description of the different types of RAID that most commonly used in SAN storage arrays.


RAID-0: RAID-0 is called disk "striping". All the data is spread out in chunks across all the disks in the RAID set. RAID-0 has great performance, because you spread out the load of storing data onto more physical drives. There is no parity generated for RAID-0. Therefore there is no overhead to write data to RAID-0 disks. RAID-0 is only good for better performance, and not for high availability, since parity is not generated for RAID-0 disks. RAID-0 requires at least two physical disks. 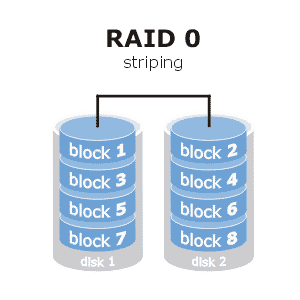 RAID-1: RAID-1is called disk mirroring. All the data is written to at least two separate physical disks. The disks are essentially mirror images of each other. If one of the disks fails, the other can be used to retrieve data. Disk mirroring is good for very fast read operations. It's slower when writing to the disks, since the data needs to be written twice. RAID-1 requires at least two physical disks. 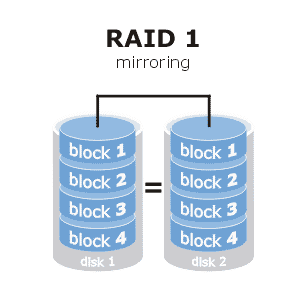 RAID 1+0: RAID 1+0, which is also called RAID-10, uses a combination of disk mirroring and disk striping. The data is normally mirrored first and then striped. Mirroring striped sets accomplishes the same task, but is less fault tolerant than striping mirror sets. If you lose a drive in a stripe set, all access to data must be from the other stripe set, because stripe sets have no parity. RAID 0+1 requires a minimum of four physical disks.


RAID-3: RAID-3 uses something called a "parity disk" to store the parity information generated by the RAID controller on a separate disk from the actual data disks, instead of striping it with the data as in RAID-5. This RAID type is not currently used very often, because it performs poorly when there are a lot of little requests for data, as in a database. This type performs well under applications that just want one long sequential data transfer. Applications like video servers work well with this RAID type. RAID-3 requires a minimum of three physical disks.

RAID-4: RAID-4 is good for sequential data access, but is not used much.


RAID-5: RAID-5 uses disk striping with parity. The data is striped across all the disks in the RAID set, along with the parity information needed to reconstruct the data in case of disk failure. RAID-5 is the most common method used, since it achieves a good balance between performance and availability. RAID-5 requires at least three physical disks. 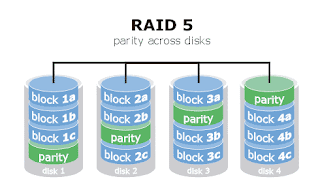 Adaptive RAID: Adaptive RAID lets the RAID controller figure out how to store the parity on the disks. It will choose between RAID-3 and RAID-5, depending on which RAID set type will perform better with the type of data being written to the disks.

RAID-6: RAID-6 increases reliability by utilizing 2 parity stripes, which allows for 2 disk failures within the RAID set before data is lost. RAID-6 is seen in SATA environments, and solutions that require long data retention periods, such as data archiving, or disk-based backup.