When the Google Doodles were initially released during the Olympics I played every single game up to the point of absolute boredom. Then yesterday I was a bit bored and started going on a random Google spree and came across the games again and once again I decided to play them, then I thought... Why not try to automate this...


So I started searching for ways to simulate Keyboard input, I found Input Simulator. This is a simple library that I found and it's quite brilliant.

So I started building a kind of bot to simulate the play on the doodles and here's what to do... Create a simple Console or Windows forms application, I decided to use forms just because I still prefer pressing a button to start something...To automate Google basketball this is the code I used... 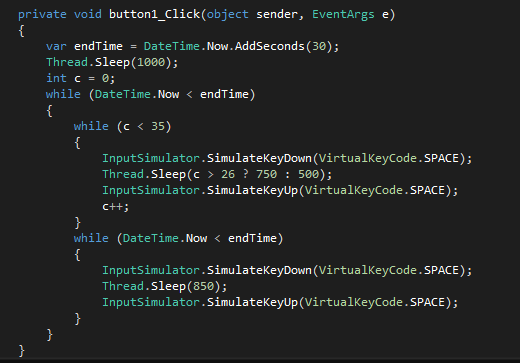 Not entirely perfect but after some trial and error I got this to work... I will attach a link to the source code which also contains a dodgy version of a hurdles hack.

I don't know of any "Real World" applications for this but I found it to be quite a useful library for what I wanted to achieve.

Source Code
Posted by Stefan Jonck at 11:04 AM